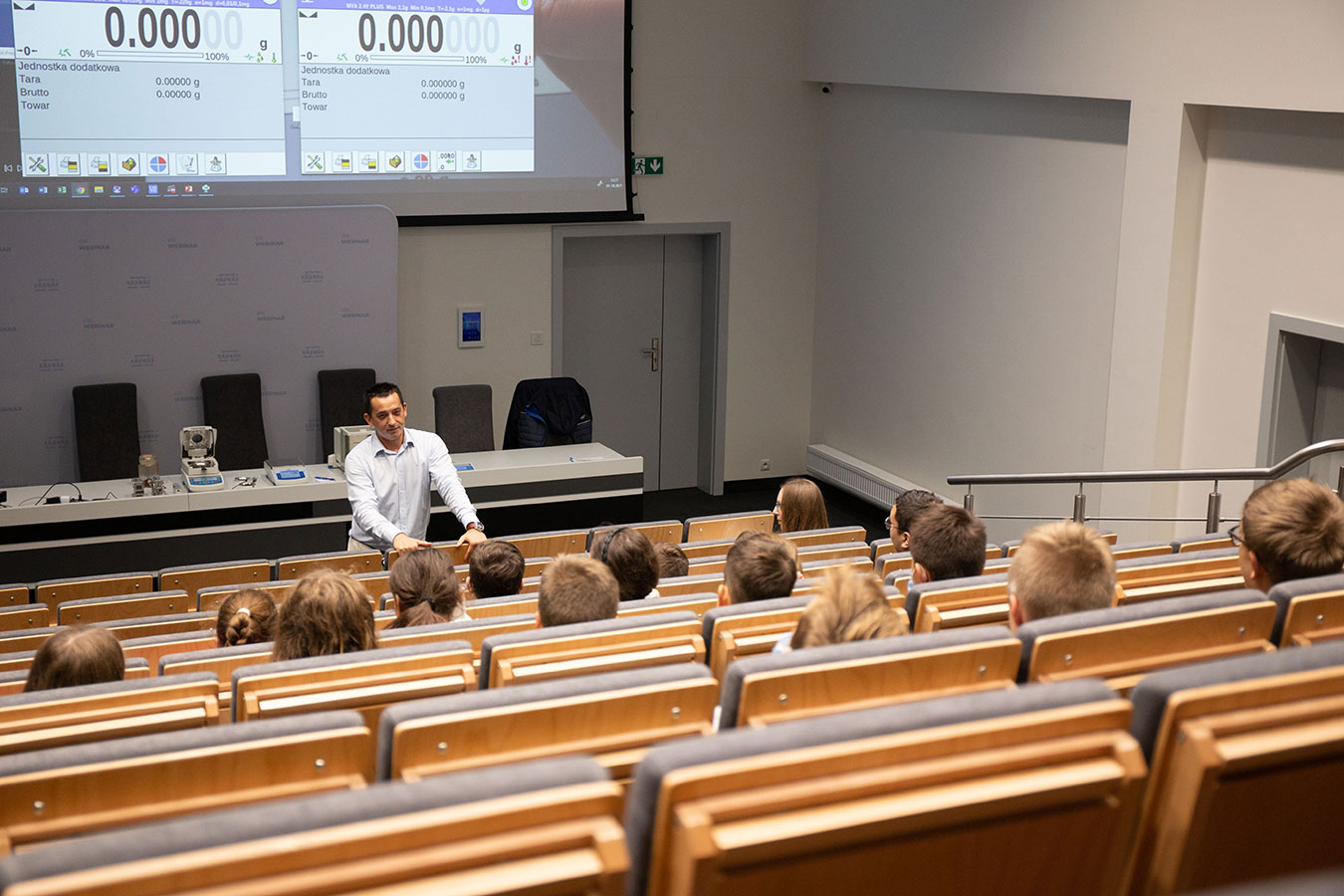 Physics is a universal science because it studies the causes and effects of phenomena we confront every day, and at the same time, it makes possible something as extraordinary as a space flight. And what is the relation between an electronic balance and physics? One of the physical quantities is force, which measures physical interactions between objects. It has four characteristics: magnitude, direction, sense, and point of application. To weigh something, we have to use force.

This is what our guests found out during the “Physics Lesson” which took place on October 1, 2021 in RADWAG headquarters in Radom. We were visited by 7th grade students of the Integrated Public Elementary School No. 14 in Radom and two of their teachers.

Seventh grade is the time when students in Poland have their first contact with physics as a science. Despite the fact that our guests had only started in the subject a month prior to their visit in RADWAG, they were able to answer most of the questions the presenter asked them, and they had plenty of questions themselves. 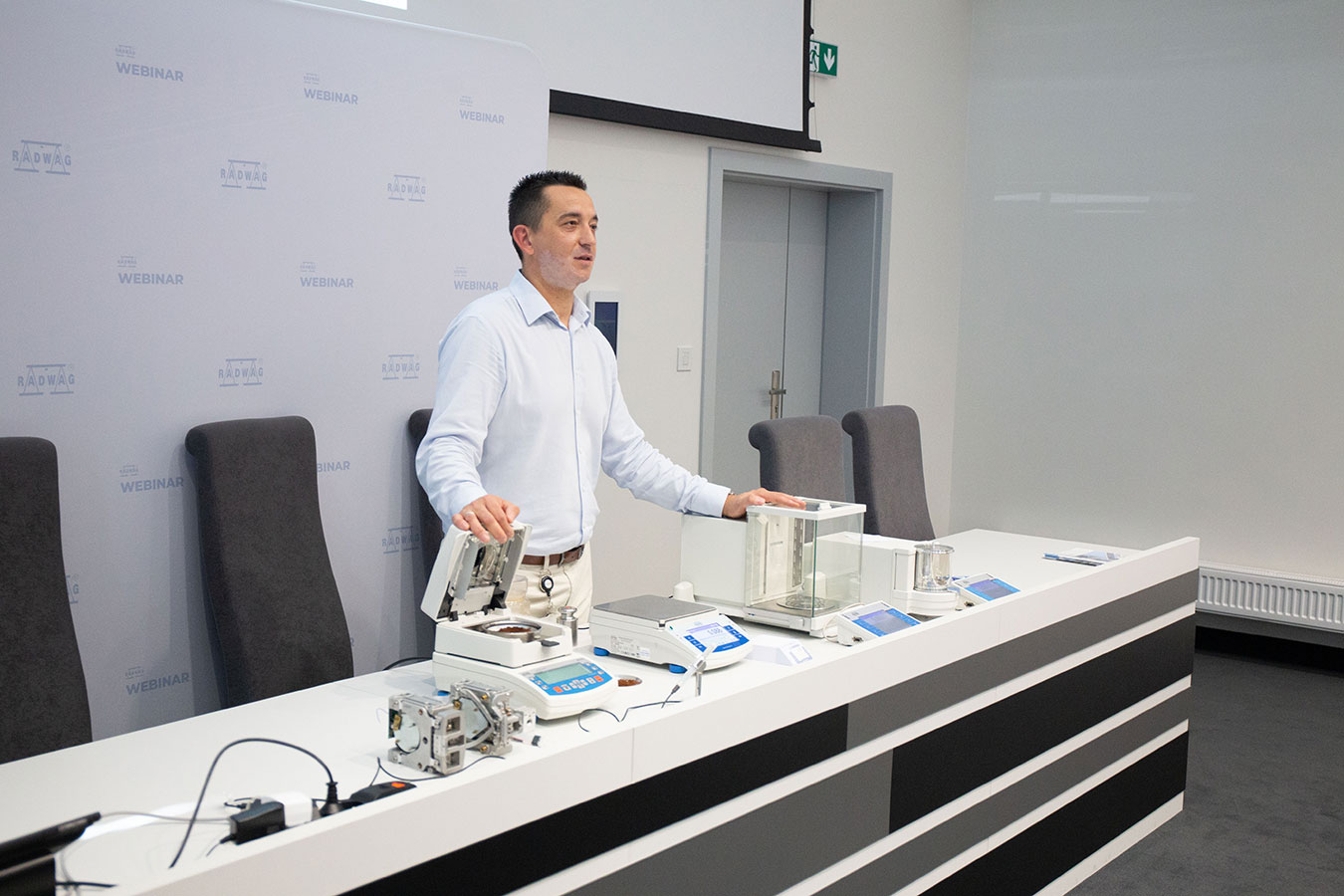 Our physics lesson began in the auditorium, where students saw some selected devices manufactured by RADWAG, namely: a moisture analyzer, precision and analytical balances, a microbalance weighing with the accuracy of 1 microgram, and THBR 2.0 ambient conditions module. THBR continuously monitored temperature, humidity, pressure, and vibration, and displayed air density, so the youth could see how the abovementioned physical quantities were changing.

The presenter then demonstrated a mass standard, commonly called a weight, and talked about a revolution in the world of metrology. This revolution concerned the redefinition of the kilogram, which took place on May 20, 2019. RADWAG hosted two scientific conferences devoted to this issue and measurement traceability in mass metrology. 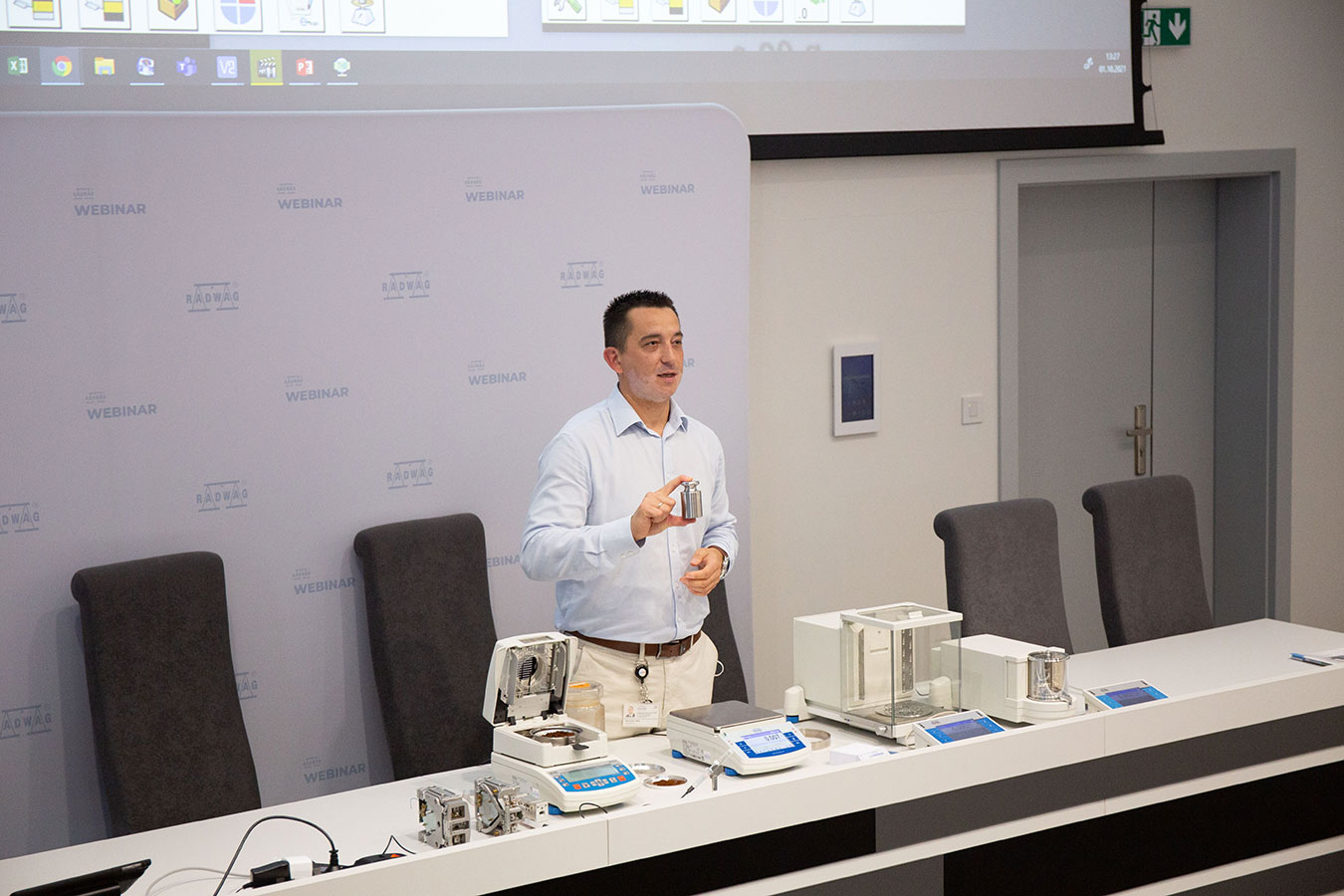 After the lecture, the lecturer, assisted by his teenage listeners, conducted experiments. One of them was drying coffee using the moisture analyzer by RADWAG. Before we got the result, students tried to guess it, and one of them succeeded in rounding (4.38% ≈ 4%). In the process, we learned that in order for the measurement to be accurate, we need to provide the balance with good weighing conditions: stable temperature and humidity, and vibration-free base.

Another experience involved weighing the physics teacher who accompanied the students. To do this, we placed a blank piece of paper on the weighing pan of the analytical balance.  After obtaining and noting the measurement result, we removed it from the pan and placed the same piece of paper on the weighing pan again, but this time it was signed by the physics teacher. It turned out that the teacher's autograph weighs over 1 milligram. Moreover, thanks to the databases, the weight of his signature was automatically saved to the balance's weighing database. 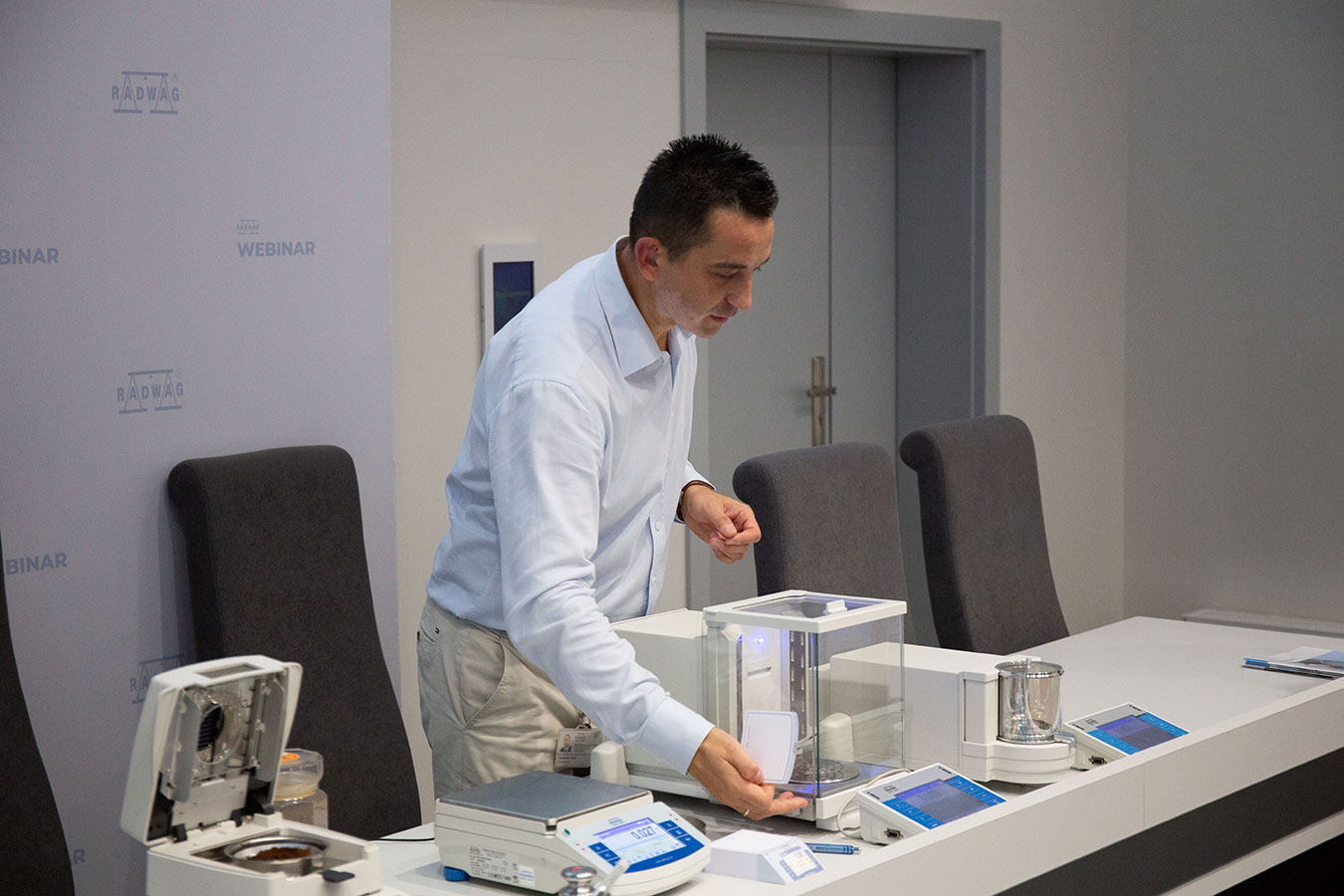 The conclusion we came to together was this: without physics, all of this wouldn't work – we couldn't make such accurate measurements. With a balance that weighs with the accuracy of 0.1 microgram, or 7th decimal place, we can measure ingredients of life-saving drugs or discover new materials from the world of nanotechnology. What is more, the comparison of mass standards, carried out using devices called mass comparators, is performed with an accuracy of 8 decimal places. In this field, we are second to none.

The next stage of the lesson was a visit to the part of RADWAG where previously seen balances are manufactured. After returning to the auditorium, the students took part in a competition to check their knowledge gained during the “Physics Lesson with RADWAG”. The students with the fastest correct answers were rewarded. 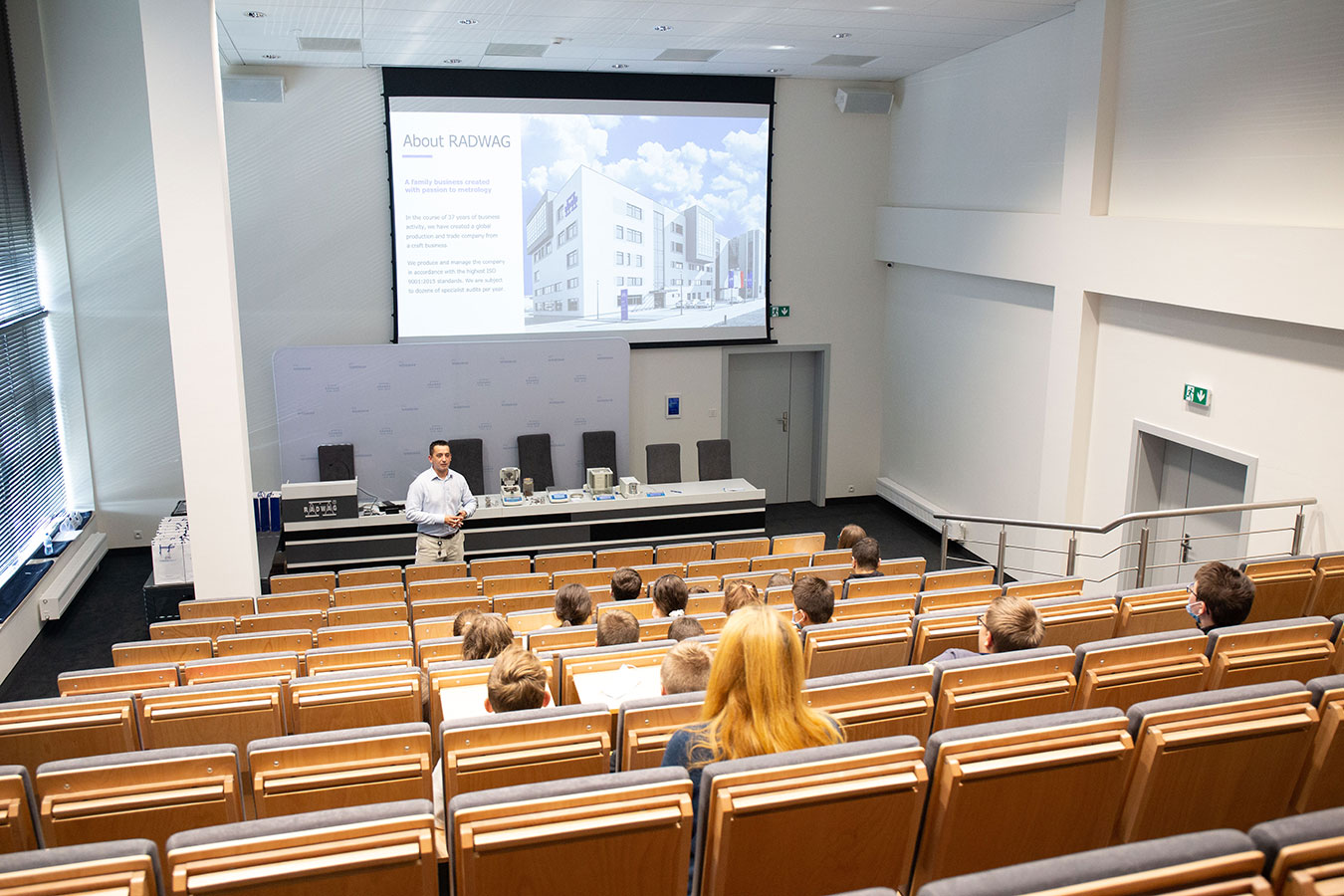 “Physics Lesson with RADWAG” was given by Radosław Wilk, Laboratory Products Manager and Senior Product Trainer, and our long-term employee. We sincerely thank the students and their teachers for the lesson.

RADWAG USA L.L.C. The Representative Office of RADWAG in the USA

RADWAG Waagen Germany. The Representative Office of RADWAG in Germany

Germany is another country where RADWAG Wagi Elektroniczne has its representative office.
More  ➜
2022-03-28

RADWAG UK Limited. The Representative Office of RADWAG in the United Kingdom

RADWAG Wagi Elektroniczne has its own foreign representations in six countries around the world, where qualified salesmen and technicians work. One of them is located in the UK.
More  ➜
2022-03-22

RADWAG Wagi Elektroniczne has six international representative offices. In each of them, we employ qualified sales staff and technicians who do their best to meet the highest requirements of our customers. One of our foreign representations is located in Spain.
More  ➜
2022-02-18

RADWAG FRANCE – It’s Been a Year! The Representative Office of RADWAG in France

It has been a year since RADWAG’s French representative office started its activity. Its official opening took place on 27th January 2021, but the office was established a few months earlier, in September 2020. We chose Cholet, a town 50 km from Brittany’s capital, Nantes.
More  ➜
2022-01-31

“Train To Be Better Than Yesterday”. RADWAG Sponsors the First Brazilian Jiu-Jitsu School in Radom

What Do Others Think About RADWAG Balances and Scales? XA 6.4Y.M.A.S PLUS Balance in the Hands of Biomer Technology, a British Company

Biomer Technology is a UK-based company that specialises in the design and manufacture of polymers for challenging applications in both the medical device and specialist industrial markets. Biomer Technology is based in Runcorn in the North West of England.
More  ➜
2021-11-17

What Are the Types of Medical Scales? Personal, Baby, Chair and Bed Scales by RADWAG – Intended Use

Medical scales are used in healthcare facilities, i.e. doctor’s offices, clinics and hospitals. Due to the application, those manufactured by RADWAG are divided into personal, baby, chair and bed scales. Today’s medical scales differ significantly from those designed years ago.
More  ➜
2021-11-02

RADWAG Wagi Elektroniczne employs product managers, constructors, programmers, balance/scale assemblers, quality controllers, and many other employees. They are all equally important and could not function without one another.
More  ➜
2021-10-20

Physics is a universal science because it studies the causes and effects of phenomena we confront every day, and at the same time, it makes possible something as extraordinary as a space flight. And what is the relation between an electronic balance and physics?
More  ➜
2021-10-11

Specific requirements of this area are a result of the fact that the weighing devices are one of many components used in the process of production of pharmaceuticals. They may influence medicine quality and as a result the patient's health.
More  ➜
« Back