According to international vocabulary on basic and general terms of metrology and definitions from encyclopedia and branch dictionaries, metrology is a science on measurements which covers all aspects relating to theory and practice and it refers to any kind of measurement independently on domain of science or technology.

The aim of this publication is not to analyze obvious theoretical analysis referring to measurements, but presentation of definitions, acceptance criteria for measuring equipment that undergoes various metrological requirements, and application of this knowledge in performance of measuring procedures.

Metrology in a laboratory, due to its requirements on measuring equipment  and measurements, can be divided into two main approaches: legal metrology and metrology concerned with science and technology.

Up to more less 2001, in Poland legal metrology regulations on measuring instruments were defined by Central Office of Measures, and they were published in Official Newsletters on Measures and Tests. The regulations, even though they were very strict, they were not compatible with legal regulations of European Union. Thus, on 11th May 2001 there has been a new regulation issued: “Measures Law” which regulates most of laws applicable to measuring instruments (Dz. U. 2001 No. 63 point 636 with alter changes).

A valid executive law is the one issued by a Ministry applicable to economical issues and metrological requirements which cover specific measuring instruments.

Presently, in EU membering countries, measuring instruments which are specified in new approach directives 90/384/EC – on non-automatic weighing instruments, and 2004/22/EC are in  certain  cases  subject  to  legal  metrological  control.  However,  it  refers  only  to  those

instruments that are introduced to market. Above directives have been implemented into Polish legislation by a Regulation from 30th August 2002 on conformity assessment systems (Dz. U. 2002 No. 166 point. 1360 with later changes).

According to valid European law, measuring instruments that are introduced to EU market are subject to conformity assessment with requirements from two above mentioned new approach directives. Conformity assessment with legal metrology, according to EU law and on meeting specific requirements, can be performed by notified body (in Poland it is Central Office of Measures) or by a manufacturer.

Granting manufacturers the right to assess conformity is a form of breakthrough in Polish mentality. So far such activities were characteristic to legal metrology and could be performed only by national offices. Granting some of the rights and competences, that are discussed in EU new approach directives, is actually a “new approach” in Poland to a position of a manufacturer which has implemented and certified its quality system. The regulation specify clear  requirements for introduction of a product to market. Declaration of conformity which is issued either by a notified body or by a manufacturer has been replaced wit ha so called Initial verification document. There is still a a problem which refers to subsequent verification, i.e. [2] verification of a measuring instrument after its initial verification or conformity assessment, which covers obligatory periodical verification or verification after instrument repair. In this case, European Union grants free choice to membering countries, and it only states that membering countries should supervise legal metrology of measuring instruments that are in use. 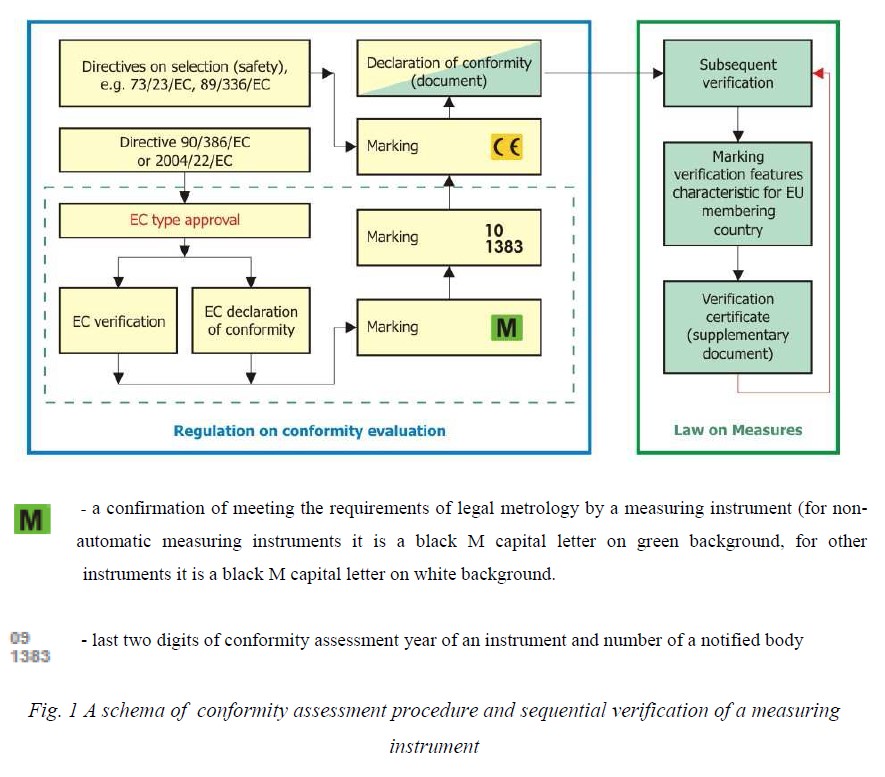 As seen above, general application from the Regulation give clear definition to each kind of a measuring instrument.

Regulation of Ministry of Economy, Labour and Social Policy   of 11th  December 2003

One should remember about all measuring instruments that have been introduced to market before 1st May 2004 and which are currently in use and instruments that are not covered by any of new approach directives. In such cases, corresponding regulations of ministry on economics are applicable.

Hopefully, the new regulations that are currently in preparation by Ministry of Economy, will consider the benefits for measuring instruments operators and citizens. Such solution would make Polish regulations very close to the ones present in countries of so called “old EU”. Our membership in EU structures gives us a much closer access to its regulations and solutions, including the ones referring to metrological supervision. Thus, one should apply those standards which have positive influence on problem solution and satisfaction of customer who are citizens of EU.

Apart from legal metrology, operators of measuring instruments have contact with metrology which is not concerned with legal regulations. It is commonly known as „scientific and technological metrology”. Basic activity which refers to this kind of metrology is calibration process.

Calibration is a voluntary activity, which is not regulated by legal metrology, but calibration results may refer to requirements determined in legal regulations.

The function of calibration process of measuring instruments and importance of its results is commonly known to personnel who realizes testing procedures or acting according to norms of quality system. Since knowledge on measurements and their errors has become common and applicable, results obtained from test procedures are more objective.

However, one should remember, that has decided to implement a specific quality system governed by international standards (ISO 9001, ISO 17025 etc.), has also accepted the need to calibrate all of their measuring instruments.

Calibration of measuring instruments is performed by competent laboratories. The most proper confirmation of laboratory competence is its accreditation by a national accrediting body (in Poland it is Polish Accreditation Centre).

According to valid legal and normative status verification is not a counterpart of calibration and the other way round. For this reason, organizations that have implemented  quality systems should calibrate their measuring instruments independently on their verification.

Differences between legal metrology and scientific and technological metrology, based on requirements form commonly known norms are presented on below table: 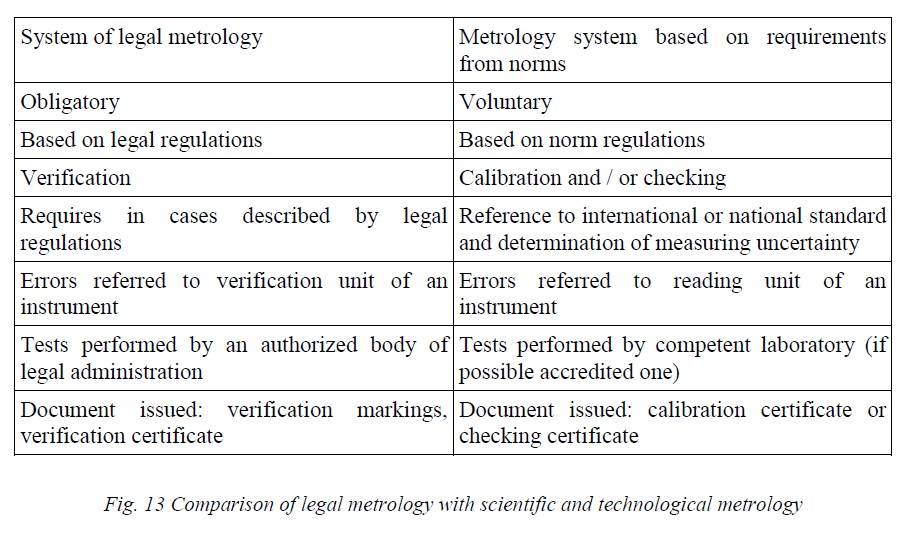 System of legal metrology, as has been defined above, is in certain cases obligatory and determined in specific legal acts. An activity of legal metrology which confirms specific requirements is verification of a measuring instrument. system of scientific and technological metrology is a voluntary one and it is based on international requirements and national norms. In this case, metrological activity is calibration process of a measuring instrument, i.e. referring its parameters to international standard and determining measuring uncertainty of this instrument. However, one should remember, that if an organization has voluntarily implemented quality norms and it acts according to specific quality norms, than it should obey its requirements.

Thus, when discussing scientific and technological metrology, one should focus on supervision over measuring equipment realized through periodical verification and periodical checking procedures, which aim at referring calibration and checking results to international and national standards (point 4.6 of ISO 9001 norm). For operators who have quality system implemented in their organization, such procedures are generally sufficient.

There is another group of measuring instruments users who do not have or do not need implementation of quality systems, and so they do not need to introduce metrological supervision. In such case, there appear some specific applications of measuring instruments, which are comfortable for operators and which are subject to legal metrological supervision, i.e. verification that is controlled by Central Office of Measures, its structures and local representatives and subjects authorized by Chairman of Central Office of Measures.